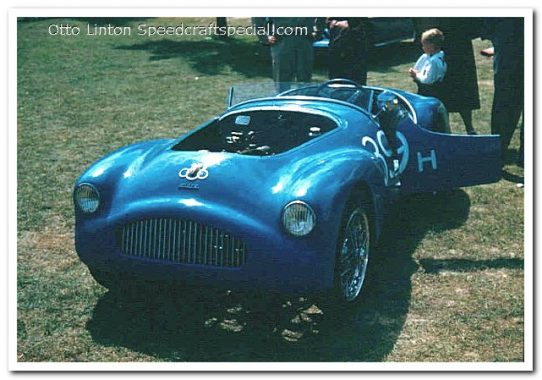 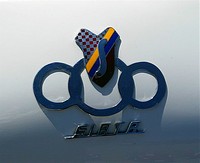 Siata (Societa Italiana Auto Trasformazioni Accessori)
was an Italian company founded in 1926 by Giorgio Ambrosini. Originally they worked on tuning Fiat cars, but by 1949 they began to produce their own. These cars where powered by modified Fiat or Crosley engines.

Renato Ambrosini established a collaboration with Enrico Nardi after Nardi left Scuderia Fararri in 1946. Nardi supplied chassis designed by Augusto Monaco, the bodies where built by Zagato and the engines where Siata modified Fiat 500s these cars carried Siata serial numbers. For example, the Siata TC (Tipo di Concorso) that Renato won two championships with had a Fiat 500 bored out to 698cc and supercharged for 45bhp.

This was followed by an ambitious Siata-Nardi project in 1948 called the Bersagliera. This car was a mid-rear engine designed car with a Nardi chassis, but powered by a Siata designed 1100cc twin cam engine. The engine was designed in house by Aldo Leoni (who had designed the successful Cucciolo “puppy” motorcycle engine that established Ducati as a motorcycle company…read more here) and was intended to produce 90bhp. However, the engine never achieved that output and the car was plagued with handling problems.

Late in 1949 Renato began project “Orchidea” on the last remaining Augusto Monaco designed Nardi chassis. Renato decided that the cost of developing an in house engine was not justified by the meager gain in horsepower over what they could achieve by modifying stock engines, so this car was powered by a modified Fiat 500 engine once again. The car was built as a coupe for the Mille Miglia with a body by Bertone and Borani wire wheels.

The coupe body was a little to top heavy for the small tubular Nardi chassis and after the secound car was bodied as a “Spyder”. The car was entered in many Italian races such as Lieto Colle, Coppa d’Oro delle Dolomiti, Aosta-Gran San Bernardo, Coppa Michelin, Circuito del Garda, Mille Miglia, Circuito di Tigullio, Aosta-Gran San Bernardo and the Targa Florio. The car performed well with the lighter weight “spyder” body.

Renato Ambrosini
found the Augusto Monaco designed tubular chassis was to difficult to build straight and was not cost effective. So Siata moved on to a box cut steel chassis for project “Amica”. The Amica was a passenger car powered by a Siata modified Fiat 500 “C” motor. Fiat had improved their design quality and Siata found that they were getting increasingly less horsepower gains out of their Fiat modifications.

Antonio (Tony) Pompeo was a mysterious figure in early SCCA racing. His showroom was one floor above Luigi Chinetti’s in NYC and was also full of Italian cars. Tony was tied into John Perona, owner of the El Morocco on 54th Street, who had a passion for exotic cars. Tony often brought multiple cars to SCCA races and arranged for experienced drivers to run them e.g. Otto Linton, Dick Irish and Jim Pauley. Some of the cars were owned by Perona and in the later days where named after the famous NYC nightclub.

In 1951 Tony Pompeo visited the Siata Factory, not only did he see the Amica in production but he saw the “Orchidea” spyder prototype sitting in the corner of the shop floor. He suggested to Renato that there would be a market in America for a car that looked like the “Orchidea spyder”, built on the Amica chassis. He also mentioned that the Crosley overhead cam engine was very popular with road racers, because it was a sturdy and light engine that could achieve great horsepower gains through modification. Tony returned to America with the “Orchidea” Spyder and had a Crosley race motor built in New York City.

Yet again Tony Pompeo turned to Otto Linton to test his latest car. Otto picked up the Siata prototype from NYC and towed it out to Wisconsin for the August 1951 road race at Elkhart Lake. The prototype now was powered by a “hot” modified Crosley 750cc engine. Tony had also arranged for Lee Kerrigan a young nursing school student from NYC to drive the car in the “ladies” race. Otto remembers dicing it out with John Gordon Bennet in one of Roger Barlow’s supercharged Simca 1100cc cars during the race. Otto really liked the Simca cars, but Bennet was a good driver and had a substantial horsepower advantage yet the Siata had no trouble mixing it up with the Simca because it was a far better handling car. Otto ran #39H on the prototype but dropped out of the race with mechanical issues.

Otto towed the Siata Prototype back to NYC for Tony Pompeo to complete the repairs and did not see the car again until it was time for the Watkins Glen race.

Tony Pompeo had big plans for Watkins Glen and Siata. He brought both Giorgio and Renato Ambrosini to the race from Italy to see the Crosley powered prototype run. Otto Linton was selected to drive the car based on his experience with road courses and in particular having raced at Watkins Glen since its inception. Giorgio did not speak English and Renato’s English was limited, however both Otto and Renato were fluent in German. Otto developed a relationship with Renato that would last for years.

The Siata Prototype was mostly a big success, it was well suited to the difficult course and attracted a great deal of attention. Sporting the #33, the bright blue car easily out paced it class, Otto Linton was lapping the second place car for the second time on the last lap of the race. The second place car waved Otto by on a straight away, but then veered into him pushing the Siata off the road. The Siata rested in a ditch only dented but out of the race and the offending driver was never invited back for any future SCCA events.

On the other hand, the looks and performance of the car did not go un noticed. Otto alone took deposits on three Crosley powered Amica Spyders based on his performance at Watkins Glen (Wessels, Scatchard, Publico). These new cars were to be based on the Amica with a similar “Spyder” Baritone body and became known as the 300BC.

Otto next ran the Siata Prototype at the Palm Beach Shores Road Races in December of 1951 still carrying the #33. He purchased the car from Tony Pompeo shortly afterwards, however Tony kept the modified Crosley race motor.

Otto Linton was a Crosley dealer at the time, so he set about building a new race motor. He installed larger valves from an MG and ported and polished the head. This was made more difficult by the fact that the Crosley had a fixed over head cam design, so all the valve and port work had to be done through the ports or up from the bottom. A regrind of the camshaft, a balanced stock cast crank  and a Weber carburetor.

The car was ready for the Florida races by March of 1952. Otto Linton first entered the car in the 12 hour Vero Beach race with #75 and a week later at Sebring with the #39, Tom Scatchard was his co-driver (who would receive on of the three Siata 300BCs that where on order).

This is one story I know well, for as a kid on vacation in Florida, Otto refused to stay at the only Motel for miles around because he was afraid that they might remember him.

During practice for Sebring the Siata Prototype broke the crankshaft. Otto sent one of his crew back to Philadelphia to pick up a spare, while he began the rebuild of the engine In His Motel Room! They used the bath tub to hold (and hide) all the parts, and once they had the replacement crankshaft they used the sink full of gasoline for washing parts. As soon as the car was back together they promptly checked out and he never went back there again. They had a successful run at Sebring with the “Motel” built engine wearing #39.

Otto Linton next ran the Siata Prototype at the Giant Despair (#56) / Brynfan Tyddyn (#50) race weekend in July 1952. The tight and mostly unpaved road course suited the Siata and he easily bested his class. 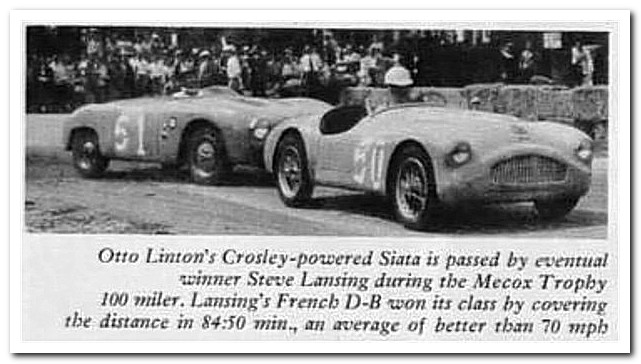 Once again the Crosley motor broke its crankshaft during practice. Otto mentioned the problem to his friend Briggs Cunningham, who replied that he had a spare Crosley crank at his shop (on the other side of Florida) and if Otto could send some one down he would let them take it. This was a steel crank from one of Crosley’s military grade water pumps and was the solution “Smokey” Yunick used on Briggs’ engines . Otto Linton co-drove the Siata Prototype with Harry Beck under the #39 on the freshly rebuilt Crosley motor.

Otto used the Siata 208CS at the SAC airbase races on the way back to Pennsylvania and began to use it exclusively. He did enter the Siata Prototype in the 1953 Bridgehampton Road Races for his English mechanic at Speedcraft Enterprises. Unfortunately, Tommy Luck wrecked the car badly.

Otto sold the modified Crosley Motor to Hilgass who built it into a ¼ midget that ran the engine successfully for many years. This was not the end of the Siata Prototype as he later sold the car to the Diaz brothers (Jimmy and Benny), as he would many of his older race cars over the years. The Diaz brothers repaired the car and fitted it with an 1100cc motor. They ran the car at Cumberland (#218) and Beverly (#89) in 1955. The car was striped down to the chassis with the intention of  creating a H-Mod Sports Racer, but that project was never finished. To whom they sold the car is not known, and Jimmy tended to paint every race car he bought bright red, we are not sure if he did it to the Prototype as well.