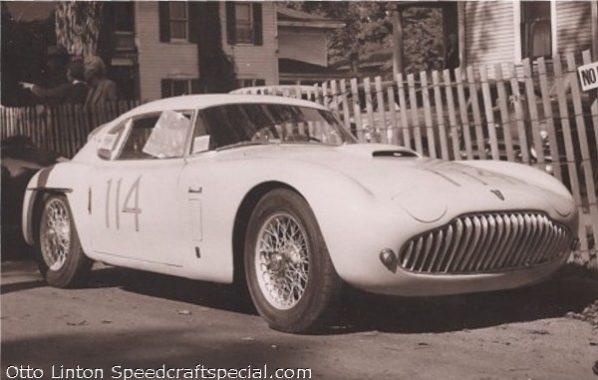 Siata (Societa Italiana Auto Trasformazioni Accessori) was an Italian company founded in 1926 by Giorgio Ambrosini. Originally they worked on tuning Fiat cars, but by 1949 they began to produce their own. These cars where powered by modified Fiat or Crosley engines.

The 1952 208 CS Berlinetta was an in-house development by Siata using a special oval tube chassis. Siata used a modified version of the Fiat Otto Vu V8 engine (Fiat had been advised that Ford held a Trademark on “V8” and named the engine Otto Vu– 8V). The unique 2 liter 70 degree engine was designed by Dante Giacosa, it was an all alloy engine with dual twin downdraft Weber carbs and featured a high mounted cam shaft (short pushrods) with upward exahust ports.

Siata hired Rudolph Hruska to make a tubular chassis in a bottle configuration which allowed Siata to place the bucket seats on the alloy floorpan which allowed a low roofline. The car had a 3-point suspended alloy differential driven by a 5-speed box. The lightweight all aluminum coachwork was designed and built by Stabilimenti Farina Berlinetta and featured new design standards like mechanically retractable headlights and ultra low coachwork construction. The Ambrosinis had been impressed with special Michelin X radial tires on a Peugeot and designed the wheels for the 208CS to fit those tires 165/400.

Stabilimenti Farina folded after just six examples were produced and a further nine were constructed along the same lines by Balbo but had a much higher ride height.

Otto Linton purchased the car (#CS060) at the factory and drove it through out Europe. He tells the story of how he came to a Russian checkpoint (Vienna was still partitioned at that time) with the car, having only minimal paper work. The Russian soldiers spoke neither german nor english, but they where laughing and egging him on with their guns. They had not lifted the barricade, but made it clear they wanted him to move forward….which he did. The ultra low roofline of the Siata passed under the barrier with room to spare.

Otto entered the car in the Watkins Glen Grand Prix on September 20, 1952, that race was halted due to a tragedy and never completed. 1952 would be the last race on the original road course through town. The car created a stir at the race as it was quicker than the Jaguars off the line, its roof line was lower than the hood of most cars and it was the first appearance of the Michelin X radial tire in the USA. The most common comment was “hey your tires are low on air”.

The Siata 208CS was one of the cars Otto was able to drive to a race, prepare it and then compete in the race. He competed in a number of SAC races in 1953 with the car. General Curtis LeMay was the head of the Strategic Air Command and was a great sports car racing enthusiast (he owned an Allard), the Sports Car Club of America (SCCA) was not well known at the time and Gen. LeMay allowed for a number of events to be held at SAC Air Force bases. The races ranged from 2hr (200 miles) to 500 miles with crowds of up to 60,000 in attendance. Otto recalls that the SAC races where great to run in, they supplied each driver with room in the barracks and a few Airmen First Class as pit crew that helped take care of all the preparations.

Otto also raced the Siata 208CS in a number of SCCA road race in 1953: May 23, 1953 at Bridgehampton Sports Car Races, July 25, 1953 at Brynfan Tyddyn Road Races and September 19, 1953 at Watkins Glen Grand Prix where he finished 1st in Class (E Modified) and 2nd overall having beat every Jaguar in the field except for the light wieght XK120C of Walt Hansgen. Watkins Glen was run at the second track layout, due to the incident in 1952.

The car was sold to Bob Murrell, who ran the car at Torrey Pines in April 1954 and the Golden Gate Races – June 1954.

We understand that the car sat for a long time in Delaware where it was hit by a snow plow. It was restored by a Siata specialist and painted red. The car is now in new england collection of Italian Mille Miglia cars.

More about Siata can be found at this great site: Etceterini.com