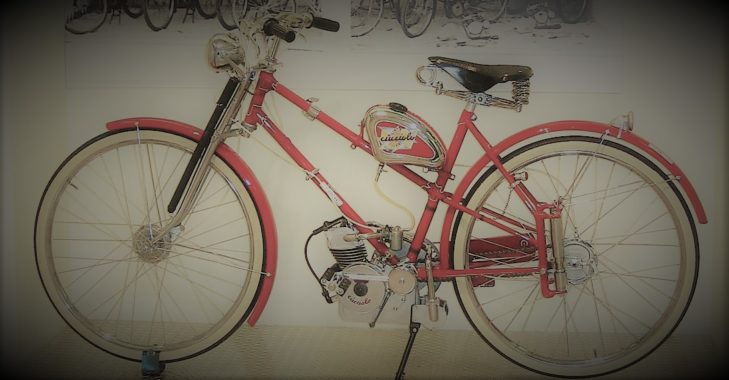 During the war, Aldo Farinelli began working with the small Turinese firm Siata to develop a small engine that could power a bicycle.

The design called for a magnetic flywheel that would transfer the power to the bicycle crankshaft.

Siata began production of these “Cucciolo” (puppy) engines at their rebuilt factory in 1944. A number of bicycle manufacturers purchased these motors in bulk and began fitting them into their frames. The “Cucciolo” engine is considered the first “new” automotive development in post war Italy.

Siata quickly ran into problems meeting demand from their small factory. Many of the bicycle manufacturers where in Bologna, Italy. There was a small Radio (vacuum tubes and tuning dials) factory in Bologna that still had production capability even though it had been repeatedly bombed during the war. Siata enlisted Societa Scientifica Radio Brevetti Ducati to build the “Cucciolo”.

Ducati moved from purely an engine supplier….to the exclusive manufacture of  “Cucciolo” powered bicycles over the next few years, building nearly 250,000 units.

Siata continued to develop motorcycles after the “Cucciolo”, but their focus on sports cars over shadowed their cycles.