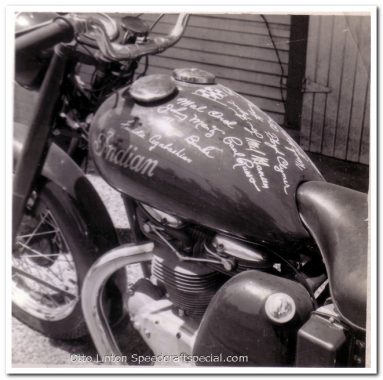 This bike is a prototype parallel twin Indian that was brought to Indianapolis for the 1947 Indy 500. Otto Linton was there as part of the Red Byron (Pauley-Vogt) team. The parallel twin did not go into production for at least a year after the race. Indian had all the drivers sign the tank. It is interesting that Floyd Clymer signed the tank next to the seat. Although Floyd is known for his books and his Indy 500 reports, he was a Motorcycle dealer and had a long relationship with Indian (he tried to keep the Indian name going through the 1960’s with imported bikes).

Who knows, Floyd may have brought the bike there himself. In any case the production bike (1949 Indian Scout 249 – 440cc) was not very good and did not sell well and Indian stopped production by 1953….no one seems to know what happened to this bike / tank. 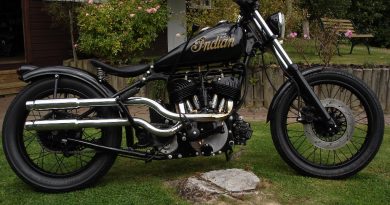