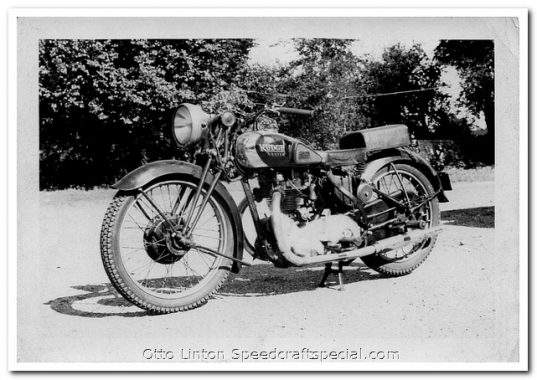 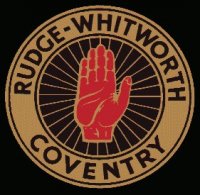 Otto Linton is known for his sports car racing, but he was also a long time motorcycle rider. He owned a number of bikes including Calthorp, Ariel, Velocette and Rudge.

During the war Otto found a Rudge Ulster at a motorcycle dealership on Broad Street in Philadelphia. The bike was fully disassembled and was literally stored in a giant wicker basket. Otto found a book, reassembled the bike and rode it for many years. As usual the Rudge was not just a normal bike it was one of only a few ever made.

Rudge motorcycles were produced from 1911 to 1946. The firm was known for its innovations in engine and transmission design, and its racing successes. They won the prestigious motorcycle races at Ulster in 1929 and establish their model the “Rudge Ulster” to commemorate that win. That had great success at the TT in the early 30’s.

Their sales motto was “Rudge it, do not trudge it.” The company was also known for its knockoff wire wheels on sports cars well into the 1960s.

The company fell on hard time in the late 1930’s and was purchased by EMI (now a record company). In 1939 EMI converted the Rudge factory over to building RADAR units for the war, needless to say the factory did not survive.

Otto’s particular Rudge was a 1939 Ulster. The Ulster had a single cylinder 500cc engine with a unique valve train. Rudge used a hemispherical combustion chamber with 4 radial valves — with two intake and two exhaust ports (the Rudge special used parallel arranged intake valves). The valve train had been enclosed since 1937, but the iron head was too heavy. In ‘38 and part of ‘39 they used a bronze alloy head….but it was subject to wear. At the very end of 1939 they produced a racing head for a handful of bikes made of RR50 Aluminum. As you can guess Otto’s bike had the RR50 head on it.