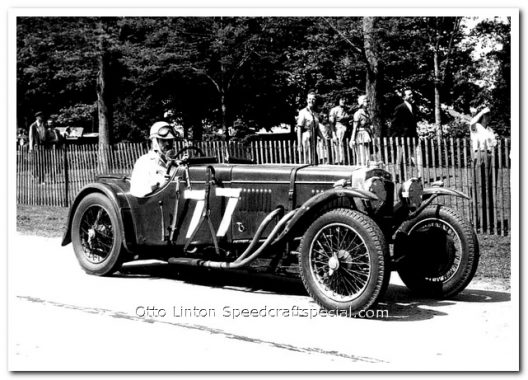 The company was founded in 1922 by Archibald Frazer-Nash after he had previously founded the GN Cyclecar Company. They where also in the armaments business having designed and built hydraulic gun turrets for aircraft since the mid 1920s.

Frazer-Nash was in the habit of entering a racing version of their cars into big races (Nurberg, Ulster, Boulogne and the TT) and then selling “replica” cars to capitalize on their success. In the Mid 1930’s Frazer-Nash became an importer and Assembler of BMW 328’s, in the postwar they built some beautiful cars using a Bristol engine developed from the BMW 328 design and tool dyes.

The Frazer-Nash TT replica was their most successful car which featured a Gough 4 cylinder 1496cc engine with a four speed gearbox selected by dog-clutch and “chain gang” drive to a bevel box rear.

Dr. Samuel Scher was a pioneering car collector involved with the AACA who had a great collection of cars. He would enter his “racing models” in SCCA events and have experience drivers run the car (e.g. Bill Milliken, Bob Morgan and Otto Linton).

Denver Cornett was visiting Dr. Scher in June 1950 and drove the 1934 Frazer-Nash TT down to the Bridgehampton Road Races for Otto Linton to run.

At the start of the feature race (standing start) Otto exploded the dog ear clutch at the line. Bill Millken remembers “I knew you had a problem when a flew past you at the start as if you where standing still”.

Otto towed the Frazer-Nash back to his shop for repair (Speedcraft Enterprises). Having repaired the clutch, it was on a shaft with the front part of the “chain gang” drive and held with a set screw, he began preparing the car for the next race. Unfortunately, the car was sitting on the showroom floor and was not completely assembled (specifically the throttle was not connected) when a salesman decided to start the car up for a customer. With the throttle wide open and at full revs the clutch set screw failed and sent the “chain gang” drive through the cowling. This required a second rebuild of the clutch as well as repairs to the car and “chain gang” drive. He still says “I knew I should have drilled out the shaft for a longer set screw when I fixed it the first time”.

Otto and I saw the restored car at an F1 race at Watkins Glen during the 1970’s. It had a beautiful restored polished stainless steel plate on the cowling with all the screw heads perfectly aligned….we had to explain to the owner that the plate was not original (he thought it was an original access plate) but was due to the exploding “chain gang” on the showroom floor in 1950.

Errata: Some sources have Otto Linton also driving the Frazer-Nash at the Suffolk County Airport race in Westhampton (May 1950), but Otto was there with a different car and Bob Morgan drove the car.